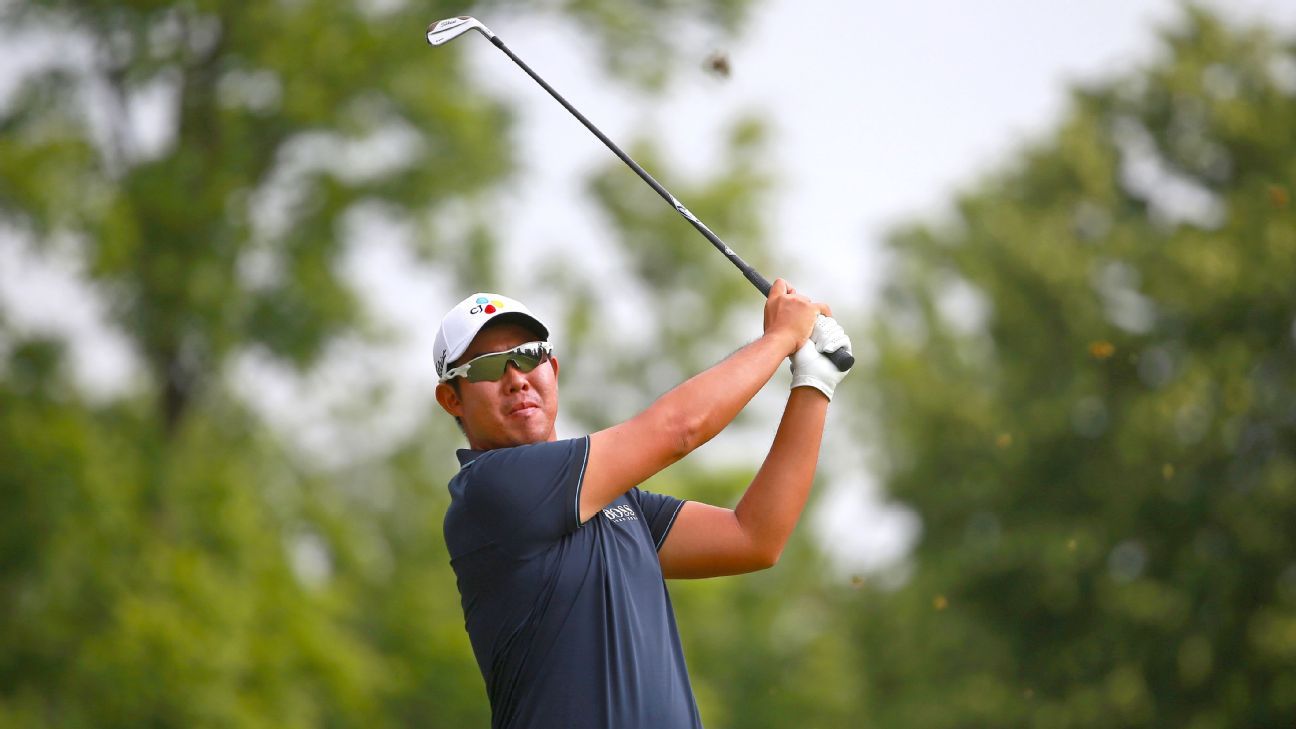 JACKSON, Miss. — Byeong Hun An was making so many birdies in the Sanderson Farms Championship he worried the storms would cost him momentum.

An finished off a 6-under 66 in the morning and then birdied four consecutive holes to start the second round, carrying the former U.S. Amateur champion to another 66 and a two-shot lead when the second round was halted by darkness.

“I was on a bit of fire yesterday. I finished with three birdies,” An said. “Was a bit disappointing that they blew the horn because I was especially in good shape and I had two par-5s coming in. Two 66s, that’s not bad. It was solid apart from one shot I hit in the water.”

Instead of setting up a fifth straight birdie in the second round, An pulled his second shot into a pond on the par-5 fifth hole and made bogey. He still shot 31 on the front. He finished two rounds with 13 birdies. And he was at 12-under 132.

J.T. Poston, who finished his first round with a 64 to share the 18-hole lead with Tom Hoge, had a 70 and was among those at 134, along with Hoge (70), George McNeill (67) and Scottie Scheffler, a rookie who led the Korn Ferry Tour Finals that ended earlier this month.

Scheffler also has 13 birdies through 36 holes.

Among those still on the course at the Country Club of Jackson when play was suspended by darkness, Cameron Percy of Australia was at 9 under and Seamus Power of Ireland was at 8 under. They each had seven holes remaining in the second round, which was to resume Saturday morning. If the weather cooperates, it should be no trouble getting back on schedule, particularly with a new PGA Tour policy that reduces the cut to top 65 and ties.

Among those assured of missing the cut was 17-year-old Akshay Bhatia, who made his pro debut with a 70 in the morning and a 74 in the afternoon.

“I know I can compete out here,” Bhatia said. “I shot under par in my first go-round as a pro. Just got to do what I need to do and say it with a smile.”

If the lead holds for An, it will be the second time on the PGA Tour he has led after 36 holes. The other occasion was two months ago in the Wyndham Championship, where he finished third. Poston won that event.

An stayed hot, even though he didn’t take advantage of the par-5s like he thought he would. He has played them in even par for the two rounds, including his bogey from the water early in the second round.

“If you hit it well and in position I think you’ll have plenty of birdie chance because the greens are … they’re not soft, but they kind of stop dead, so they don’t spin as much or they’re not as firm as I thought it would be,” An said. “I think you can fire at the flag and it stops within couple feet. Definitely see a lot of birdies out there.

“I definitely need a lot of birdies on the weekend as well because people can make birdies out here.”

Carlos Ortiz of Mexico and Harris English each shot 71 and were at 8-under 136.

Brandt Snedeker, at No. 41 the highest-ranked player in the field, was at 6 under for the tournament with two holes left in his round. Joaquin Niemann, the 20-year-old from Chile who won last weekend at the Greenbrier, ran into a rough patch and was hovering around the cut line until a late birdie. He was at 4 under — two shots above the projected cut line — with two holes remaining.

Defending champion Cameron Champ had a 72 and was eight shots behind.

Swing Patterns – Swing Technique! – 98% of Golfers Don’t Understand!
Lydia Ko’s comeback season helps her claim the one LPGA award she was still missing
13 of the greatest feuds in golf history
How GOOD GOLFERS Break 80! Simple Golf Tips
HOW TO REALLY WHIP the golf club THROUGH the ball!